These initiatives facilitate the ownership, management, development and sustainability of black-owned businesses, particularly in industrialised sectors.

Localisation is intended to build local capabilities for products or services that are currently imported or delivered through international entities. ACS participates in the localisation agenda. We are both as a local supplier and procure products and services from local suppliers. 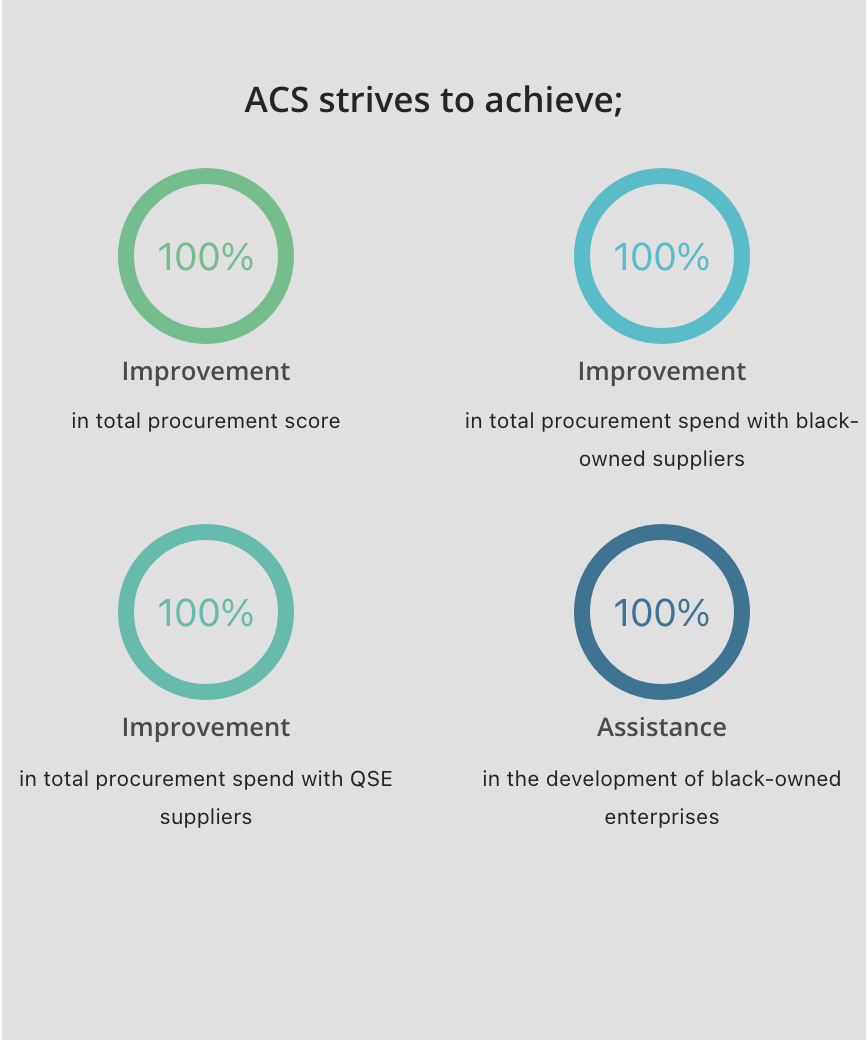 On 25 July 2019, The ACS Eastern Cape and Head Office teams, together with Dangwana Senior Secondary School; celebrated the handing over of 12 new flushing Toilets for the school as well as School uniform packs for 50 kids.

In addition, ACS has donated a borehole, two (2) new classrooms & a new kitchen for the school in previous years. In attendance where the ACS team, the Dangwana Management team, The Circuit Manager, Parents, Chief Zanozuko and the School children. In the words of the School’s management in thanking ACS, this is what was said in summary: “Siswele milomo eluwaka, siyabonga ngenhlokomo.” Simply translating to “ACS, Thank you so very much”. 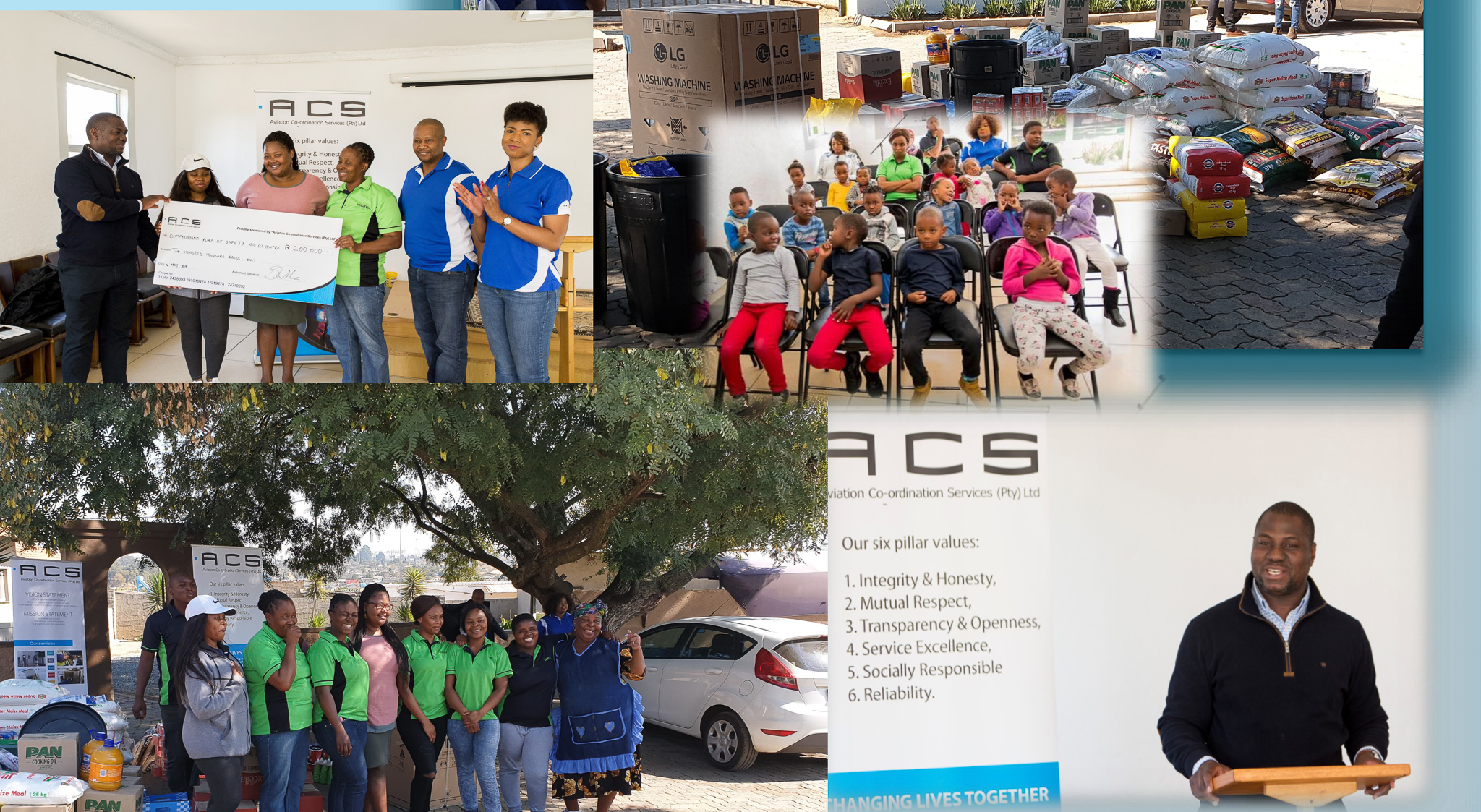 Our May 19 SED/CSI Contribution at Dimphonyana tsa lapeng Home of Safety, Changing lives together, Thank you ACS! 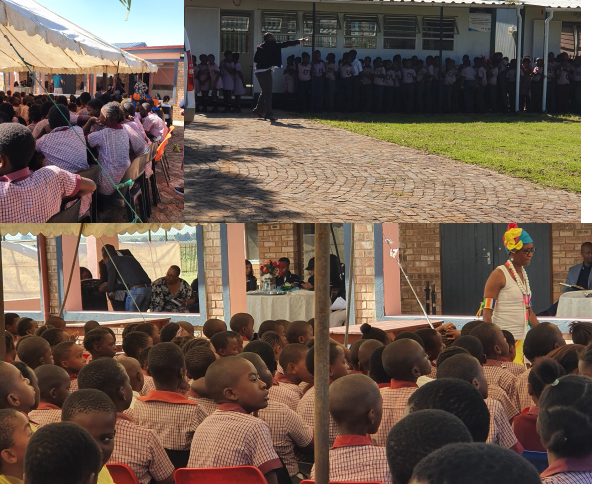 HISTORICAL BACKGROUND
‍Saffola Primary School is a public primary school in Bapsfontein, Kempton Park which caters to children from Elandsfontein and neighbouring farms around Bapsfontein.Saffola Primary School was established in 1978, on plot number 17 Hartebeesfontein (Bredell, Kempton Park). In 2009, due to the unavailability of space and the growing number of student enrolment, the school was relocated to Plot 412 Bapsfontein as a result of the closure of smaller farm school called Ukthula Primary School. The enrolment has increased to approximately 445 learners from the ages of 5 -13 (grade 1 to grade 7).The adoption of Saffola Primary School by ACS started in 2016. ACS donated 2 x classroom units (7m x 8m), colour printer, an intercom system as well as stationery and hygiene packs to the learners
‍
ACS SOCIO-ECONOMIC DEVELOPMENT EVENT: KITCHEN HANDOVER
On Friday, 6 March 2020, ACS unveiled a donation of the newly built facility to the school.
The brand-new facility included a fully-equipped kitchen and a dining hall, which was meant to create a healthy environment where learners could learn and grow, physically, mentally and socially.
The event started at 09:00 and kicked off with an opening and welcome note by the school principal, Ms B.C Garane, who thanked ACS and all who donated to the school for their continued support  towards the  school and community. This was followed by an introduction of the school’s staff members as well as the companies which were in attendance and the activities for   the day.

ADDRESS BY ACS CEO
Mr Duke Phahla, ACS CEO, then took to the podium to address all those in attendance – the learners, the teachers, ACS staff members, the school’s landlord, SGB Chairperson as well as the other companies in attendance. His address had a key focus on the importance of children staying in school and being allowed the privilege to just be children. The contribution that ACS has made  in line with ensuring the children of Saffola Primary School are encouraged to be at school, where more children are able to be educated, thus ensuring an empowered generation of future leaders.  “We’re an organisation that prides itself in our six pillar values that exist to keep us grounded, and teach us to treat employees, customers, stakeholders and our communities with respect and dignity”, said Mr Phahla, ACS CEO.
‍
ADDRESS BY DISTRICT OFFICIAL
The district official, Mr Hansie Goosen also addressed all those in attendance. Mr Goosen addressed the crowd with regards to the improvement that the school has made to its learners and the community.    Mr Goosen elaborated on the school’s performance, from below provincial performance to a school that is constantly achieving 65% and above. He expressed gratitude to interventions made by the Department of Basic Education such as teacher workshops and Policy Assessments in order to boost teacher morale and learner performance.
The staff of ACS also handed out branded school bags to the learners, school shoes as well as uniform for the less fortunate learners.
Mr Phahla officially unveiled and handed over the keys of the new kitchen and dining hall to the SGB members.
‍
FUN ACTIVITIES OF THE DAY
The day’s festivities proceeded into a performance from learners showing off their skills in traditional isiZulu and Pedi dancing. Leaners were also treated to a clown comedy show and balloon sculptors courtesy of ACS.
‍
CLOSING
The day drew to a close with lunch prepared and served to all the learners the school staff and ACS staff, who worked tirelessly to ensure the successful execution of the day event filled with fun and laughter.
Learners were also provided with snack-packs to take home . The ACS values speak to the Socio-Economic Development Programme which aims at empowering communities through carefully-selected projects. As an entity, ACS supports skills which ultimately lead to better lives.  Compiled by: Rhoda KekanaCorporate Affairs AdministratorDate: 11/5/2020 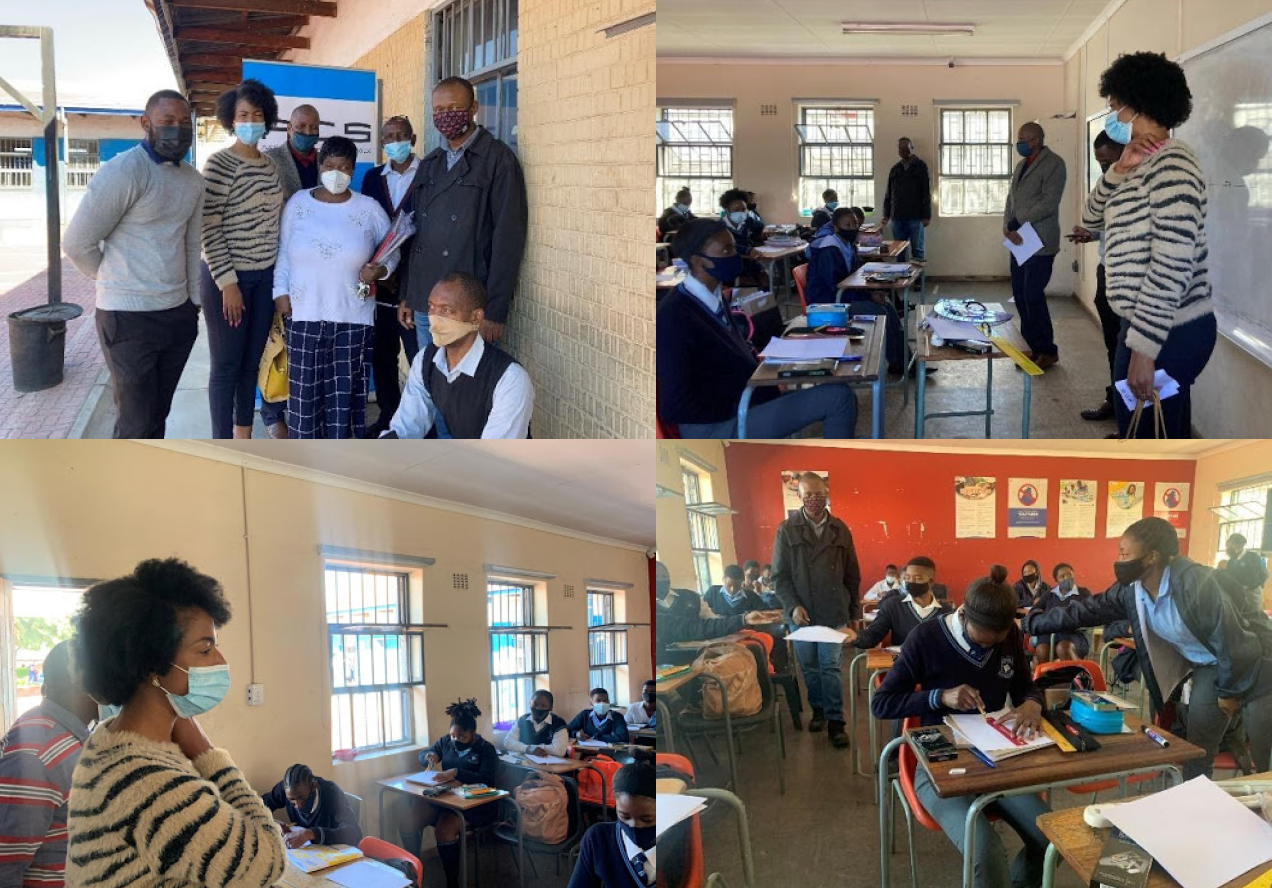 As part of ACS’s continued investment towards the education of South African learners and as part of the company’s Social Economic development strategy, ACS donated R175 000 towards Mathematics equipment for Realogile Secondary School in Alexandra township, Johannesburg. Speaking at Realogile Secondary School on 13 May 2021, Senior Manager, Human Resources at ACS, Shirley Mnisi, said “As ACS, our mission is to equip learners today for them to contribute to our society tomorrow”.
‍
Educational DevelopmentThe importance of contributing to communities and education has always been high on ACS’s priorities. In 2019 ACS donated towards the building of a kitchen, 12 flushing toilets a borehole and school uniforms for Dangwana Senior Secondary School in the Eastern Cape.  “The impacts of Covid-19 on the aviation industry have been unprecedented, however, the disruption and impact to education will be felt for years to come and it is imperative that companies continue to support the educational institutions”, said Mnisi.

Advocating for educational opportunities“We would like to thank ACS for their donation, after the difficult year 2020 was and the effects of COVID-19, educational support and donations to our school have slowed down. We appreciate the donation, and we pray it goes a long way to improving the results at the end of the school year”. Said ……, Principal of Realogile Secondary School. In conversation with the school principal and other dignitaries in attendance, Shirley Mnisi remarked “Black excellence is achieved through great education”.‍