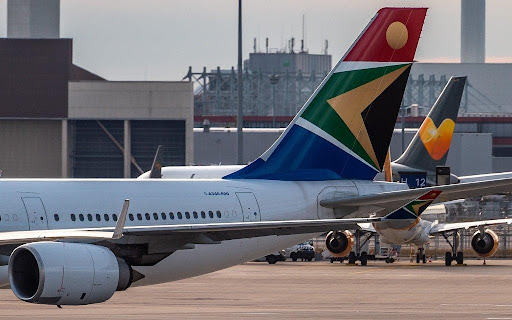 SAA's next step towards taking to the skies again is taking possession of two leased A320s. The aircraft flew from Abu Dhabi to Johannesburg on Thursday. For SAA interim CEO Thomas Kgokolo this is a "tangible manifestation" of the hard work SAA's staff are putting in.

South African Airways says it has taken another important step towards resuming flights, with two leased Airbus A320 passenger aircraft which landed at OR Tambo International Airport on Thursday evening.

The modern aircraft, which were among the planes SAA sent back to lessors, were placed in storage and given six-year maintenance checks in Abu Dhabi during the airline's time in business rescue.

Both aircraft have been given "rigorous technical checks" and cleared for passenger flights, said SAA interim CEO Thomas Kgokolo in an official statement.

The aircraft actually owned by SAA at that time were just five A340-300s and four A340-600s, used for long-haul flights. These aircraft, however, are not very fuel efficient.

Now, work is continuing to prepare staff and fine-tune logistics ahead of SAA's return to the skies. A date is still to be announced.

In an internal letter to employees dated 12 August 2021 and seen by Fin24, SAA tells staff the airline has made noteworthy strides at group level and in all areas of the business, including the settlement agreement reached with pilots, offers made to managers, and specialist pilot positions. it also mentions SAA receiving its renewed operating licence from the Civil Aviation Authority.

The letter further says that the due diligence process with SAA's strategic equity partner - the Takatso consortium - is gaining momentum and plans are well advanced for cargo and charter flights.

"Internally, the SAA restart plans are at full thrust and the employee re-boarding project is in motion," the letter says.

Air Chefs and SAAT's section 189 retrenchment processes are underway "and once restructured, the SAA Group will have 'fit for purpose' subsidiaries that will support and become the conduit for growth of the aviation industry in the country," the letter states.

Regarding Mango, SAA employees are informed that the boards of SAA and Mango took a resolution to place the low-cost airline under business rescue due to financial and operational challenges.

"We are aware of how difficult the current situation is for all employees at Mango. SAA wants nothing more than to rescue Mango and give it a chance at viability," the letter states.