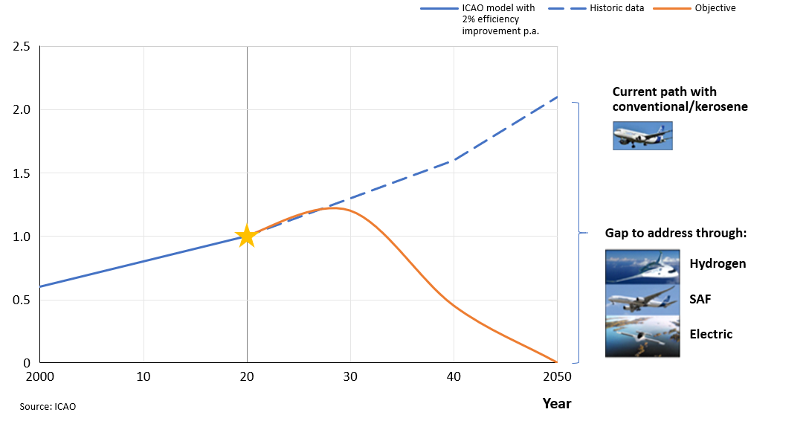 The path to zero emissions for the aviation sector by 2050 requires a combination of solutions where new propulsion and fuel technologies will play a major role. By some estimates, all flights of less than 2,500 miles, representing today more than 50% of CO2 emissions of aviation, could be electrified or powered by hydrogen. The Target True Zero initiative is working to accelerate the deployment and scaling of zero-emission aviation, leveraging electric and hydrogen flight technologies.

The COVID-19 pandemic has sharpened the public’s understanding of the role that flying plays in our lives. In addition to the incredible loss of life, people around the world have felt tremendous sadness as they became unable to see loved ones who live far away. Millions of people lost their job in the tourism industries, and governments with the wealth to support their aerospace and aviation sectors spent billions of dollars trying to keep afloat what are considered strategic sectors providing significant employment.

At the same time, there has been a renewed focus on the environmental impact of flying. The European Union’s Fit for 55 climate change plan includes proposals to increase the cost of aviation fuel and mandate sustainable aviation fuels (SAF) in a bid to cut emissions. France recently passed a law outlawing flights where there is a similar train route that can complete the same journey within 2.5 hours. The UK’s Transport Decarbonisation Plan sets a target for all domestic flights to be zero emission by 2040.

While current emissions from air travel account for approximately 2.5% of global CO2 emissions, that proportion is likely to grow as other industries find ways to reduce and abate emissions, and emerging markets see an increase in demand for flights. According to the European Commission, by the middle of the 21st century, demand for flying could increase aviation’s greenhouse gas emissions by upwards of 300% over 2005 levels if no drastic measures are taken to reduce emissions. Furthermore, there is a growing understanding around the additional climate impact of aviation through the production of non-C02 emissions, which could be responsible for as much as 60% of the sector’s contribution to climate change.

According to the ICAO, the United Nations specialised agency that oversees aviation, the path to zero emissions for the aviation sector by 2050 requires a combination of solutions where new propulsion and fuel technologies will play a major role. SAF that can be dropped into existing engines offers the most significant opportunity for reducing aviation’s emissions in the near term – especially for long-haul flights where a step change in technology is still required to transition away from traditional combustion.

However, short-haul flights of less than 600 miles account for more than 17% of total airline emissions that breakthrough technologies such as electric- and hydrogen-powered aircraft can play an important role in addressing – reducing not just C02, but other types of emissions that affect human health and the environment such as NOX and contrails.

By some estimates, all flights of less than 2,500 miles, representing today more than 50% of CO2 emissions of aviation, could be electrified or powered by hydrogen. And there is no theoretical range limit for aircraft powered with a combination of hybrid electric systems and SAF. Flight networks incorporating zero-emission aircraft are also likely to become more efficient as they create incentives for smaller flights that operate within a point-to-point vs a hub-and-spoke system.

Electric and hydrogen aviation represent not just a chance to make aviation more sustainable, but a tremendous economic opportunity as well. Four electric aviation companies – Joby, Lilium, Archer, and Vertical Aerospace – announced in 2021 their plans to go public. The previous year also saw a number of important milestones for hydrogen and electric aviation. In September 2020, the startup ZeroAvia completed the first passenger flight in a commercial-grade plane powered by a hydrogen fuel cell taking off from the UK’s Cranfield Airport.

Within the same week, Airbus revealed three concepts of zero-emission commercial aircraft which could enter service by 2035, including a turboprop design (up to 100 passengers) with a range of more than 1,000 nautical miles, a turbofan design (120-200 passengers) with a range of 2,000+ nautical miles, and a“blended-wing body” design (up to 200 passengers). Boeing, meanwhile, is also pursuing certification of a battery-electric aircraft with its joint venture, Wisk, alongside its commitment to achieving 100% SAF capability on all its aeroplanes by the end of this decade.

Such a shift will require coordination between the public, private and civil society sectors globally. For this reason, the World Economic Forum recently launched the Target True Zero initiative that is working to accelerate the deployment and scaling of zero-emission aviation leveraging electric and hydrogen flight technologies.

The Forum was joined for this launch by a group of high ambition partners, including Airbus, Alaska Airlines, Ampaire, Boeing, Easyjet, Embraer, Eve Air Mobility, Gulfstream, Joby Aviation, MagniX, Rolls-Royce, Schiphol, Surf Air, Universal Hydrogen, Wright Electric and Zeroavia; along with knowledge partners McKinsey and Company, the Aviation Impact Accelerator at the University of Cambridge and the Aviation Environment Federation; and with generous support from the Quadrature Climate Foundation and Breakthrough Energy.

This initiative will look at what is needed to unlock the potential of true zero-emission aviation in the areas of technology, industry dynamics, infrastructure and supply chain, regulation, and public acceptance. By examining questions around the readiness of technologies, total cost of ownership and infrastructure requirements, we can help create a common fact base to support leaders making investments and policy to accelerate decarbonisation of the aviation sector.

Target True Zero will present an industry roadmap for accelerating industry transition to be publicly released at the UN Climate Change Conference of the Parties (COP26) in Glasgow, as well as a number of articles and industry commitments around technology, financing the transition and policy. By accelerating the transition to zero-emission aviation, we can ensure equitable growth around the globe while ensuring a healthy planet for future generations.