Covid travel: Fully jabbed from EU and US could avoid quarantine 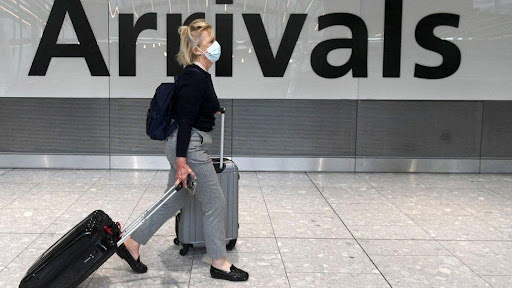 A review of the border rules is due by 31 July - the second date in the Department for Transport's plan for a safe return to international travel.

The government's Covid Operations committee was due to meet on Wednesday morning.

Downing Street and the Department for Transport declined to comment on newspaper reports the government would go ahead with the plan to also exempt people vaccinated in the US and EU.

The travel industry has been pushing for this change in the rules so that people living abroad can more easily come to the UK for holidays or to visit loved ones.

"At the moment we're in this slightly ridiculous situation where if I'm on a plane from Spain, because I'm lucky enough to have had two jabs, once we get to the UK I just wander off, no problem," said travel expert Simon Calder.

"But the person sitting next to me, who happens to have had their vaccinations in Spain, not in the UK, has to go and sit in a room for 10 days. Doesn't make sense."

How would you be affected if the government allowed fully vaccinated travellers from the EU and US to avoid quarantine when they arrive in England? Get in touch.

The aviation industry is also calling for a change after carrying out a 10-day trial of checking the vaccination status of passengers.

British Airways, Virgin Atlantic and Heathrow Airport wanted to demonstrate that vaccination status could be checked away from the border and allow safe entry to the UK from countries on the amber list.

The companies said 99% of documents were verified correctly during the trial, which involved about 250 fully-vaccinated participants from the US, the Caribbean and Europe, travelling to Heathrow.

Two passengers had their credentials rejected, the companies said: one because their vaccination was completed less than 14 days before travel, and the other because of a discrepancy between the name on the passport and on the vaccine card.

The relaxation of the quarantine rules for travellers into England from the EU and the US is backed by a broad coalition of government ministers, who see the benefits to the tourism industry and the economy in general.

"There's no reason not to do this," said one advisor. Another warned that an airline could go bankrupt if it didn't happen.

A decision may be imminent but it may take days or weeks to put it into practice. For example, airlines will need time to prepare because they'll be the ones checking the documents.

And the recent creation of an "amber plus" category at the last minute and without the knowledge of some members of the government shows that sometimes the process doesn't always go smoothly.

Then there's travel in the other direction, with the US in no rush to allow in British travellers despite the high-profile launch of a transatlantic travel taskforce last month.

British Airways, Virgin Atlantic and Heathrow Airport said the UK was falling behind the EU in opening up to international travellers.

BA chief executive Sean Doyle said the trial provides the evidence that the government needs to allow fully vaccinated visitors from low-risk countries to come to the UK without self-isolating.

Heathrow boss John Holland-Kaye said there was "no reason to delay with rolling out the solution from July 31", while the head of EasyJet told LBC such a change was "the right thing" but a "little bit too late".

Freddie Julius runs tour company Tourist England which puts on trips for overseas visitors. He said around 80% of his customers are from the US and EU and "over the last 18 months we've seen almost none".

Image caption Tourist England said a rule change was critical for the revival of the travel sector.

He said changing the rules to allow vaccinated tourists to visit without quarantining was "critical for the revival of the inbound tourism sector".

But he told the BBC any change needed to be lasting, adding: "The constant easing and tightening of restrictions have made it almost impossible to plan ahead, both for tour companies and tourists."

However, even if the UK changed its rules for the US, its citizens have been urged not to travel to the UK by the country's health protection agency, the Centers for Disease Control and Prevention.

And the US border is currently closed to the UK, as well as many other countries, except for US citizens.

The UK and US have set up a taskforce to discuss a travel corridor, although earlier this week the White House said it had no plans to lift Covid-19 travel restrictions for non-Americans.

Boris Johnson told LBC on Wednesday that "we're talking to them the whole time".

The EU has encouraged its members to gradually lift travel restrictions for the UK, and each country has its own rules.

Labour's deputy leader Angela Rayner told Sky News the potential plan was "reckless", adding: "We also know that people who have had the vaccine of course can still get the virus so a testing regime is very important and crucial as well."

Under current rules, other countries are granted a "traffic light" status for arrivals - red, amber or green.

The vast majority of countries, including the US and many European countries including Spain, Italy and Germany, are on the amber list.

Adults who have been fully vaccinated in the UK, and under-18s who are UK residents, no longer have to self-isolate after visiting any amber country apart from France.

But anyone who was fully vaccinated outside the UK still has to quarantine for 10 days on arrival, or pay for the test-to-release scheme to shorten their quarantine.